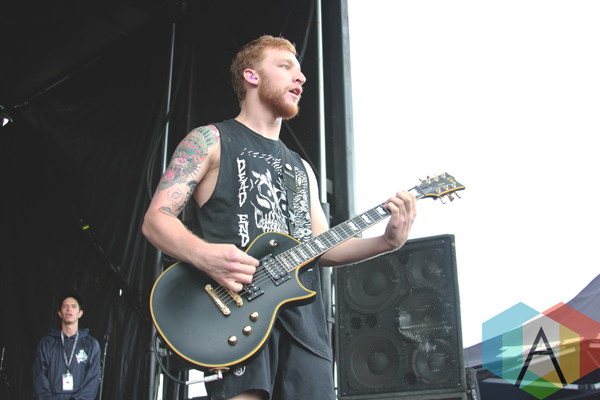 We all have that one band that we would never miss seeing live. Doesn’t matter where, if you have the funds, or even if you have to play hooky from work. You make it to that show, hell or high water. For me, that band is The Story So Far (TSSF). I’ll never forget the first time I saw the band from the Bay Area live. I was in Minnesota and they were playing at the Varsity Theater. They took the stage and you immediately felt the energy shift in the venue. From that moment on it didn’t matter what kind of day you had or what was going on in life outside of this moment. For the next few hours, we all came together for one thing and that was to become submerged into the music of this phenomenal band.

Now it feels like a light-year since we’ve seen any band live, but it definitely has been rad seeing our favorite bands/artists using the downtime to create and record. We’ve also seen members of our favorite bands branch out and release music from new projects that they have become a part of. Now in regards to the members of TSSF, I’m referring to guitarist, Will Levy. Now it seems the chaos of 2020 did not seem to put a huge damper on Will creatively. We didn’t see anything new from TSSF, but we did see the creation of new music from a newer project he’s a part of and he even let us in on a new hobby of his, photography.

We stay on the West Coast for this one and we venture to the Bay Area of CA. Now in addition to playing rhythm guitar in TSSF, Will also plays bass in the band Cold Moon. Now given the musical background of the band members, the sound we get is not something we’d expect to hear. But in turn, that’s what makes the music that they are creating so incredible. In May of 2019, Cold Moon released the EP “Rising”. The EP opens with the track “Wake Up” and here we are introduced to the band’s unique and slightly haunting melodic sound. Almost has a softer, Brand New/Devil and God vibe to it. The EP picks up a bit with the tracks “Canary” and my personal favorite “Sender”. And even with the more upbeat tracks on this EP, we still get that entrancing sound that makes you want to keep it on repeat all day long. We come around to 2020 and see through social media that the band is working on new music. Fast forward to March of this year and the band gives us a new single, “Simpleton”, along with the news of an album dropping in May. In April they release another two singles off the upcoming album, “Gold Lake” and “Lost”. Now with these new tracks, we hear a slight change, one I would describe as a modern-day Neil Young type of sound. And that’s something I think we can all enjoy and appreciate.

Now as if playing in two bands wasn’t enough, Will continues to show us that he’s quite the versatile artist both musically and behind a camera. Over the course of 2020 he shared photos he took while he was traveling and on tour. He even offered some of these photos as prints. You can still check them out, snag one or three, through the site Darkroom. I copped a few and they are breathtaking shots. Check them out!

I recently reached out to Will and he was awesome enough to answer some questions I had pertaining to his musical background, Cold Moon, his photography, and more!

• I started playing guitar around the age of 6 or 7. I took bass lessons at the local music store and my dad would teach me guitar chords at home. I was inspired by my Dad and our home. He had all of these cool guitars laying around the house and music was a constant at home. He’s for sure the main reason as to why I got into playing music, it was infectious, he made it look so fun and that is what I instantly connected with.

•Yes, absolutely there was, I played a talent show at my middle school when I was 11. A friend and I covered Taking Back Sunday and I remember walking off stage and meeting my dad at the side door and saying something like “that was the best feeling in the world, can I do this forever?” or something like that. I started to give up on sports and lean into punk rock.

•Jack, Mike, and Kevin are lifetime friends, they started the band a long time ago and just had been stacking songs basically. Mike asked about jamming and I jumped at the opportunity to play bass and do something new with some longtime friends. It’s been one of the healthiest and exciting things to come into my life, the pace is great, the communication has been on point and I have been able to learn so much from the experience and the individuals. I’m pretty happy to be playing bass, it’s totally out of my comfort zone and it’s helped me be a better musician.

•Thank you! We were definitely listening to a lot of Neil Young, I know I was for sure. Tom Petty, Neil Young, CSNY, Big Country, Hall & Oates, ELO, etc. We were really digging all of the vocal arrangements and the feel of those records.

•The photography just kind of happened. It really started with being on tour and taking 35mm disposable cameras with me and then I was given a point and shoot, then I dove further into it from there. It’s just a fun little hobby that has just helped document the places I see and the people I meet. I never thought I’d be able to return to some of those places, I really wanted to cherish it as much as I could.

• I think of the few years that we just hit the road nonstop, about 2012-2014, we’d average about 9 months on the road. It was such a chaotic, busy, and exciting time, that it’s hard to pin down specific moments, they exist, but there can’t just be one defining one for me. It feels as if those years happened all at once and what I take away from it is that we learned so much then and had still had the best time of our lives, nothing was going to stop us. It was really such a fun and fast-paced run that there was never a moment for exhaustion or rest, we just kept going. I’ll always cherish that because it’s a moment that really can’t be repeated.

• This feels impossible to answer, but my initial first choice is Neil Young’s ‘On The Beach’. It is my favorite Neil Young record and has zero duds. The second would be Eddie Harris ‘Plug Me In’, I took a chance one day at a local record store, diving into jazz music and I read the back cover and was hooked, it’s been one of my favorite records to listen to. Last would be George Harrison’s ‘All Things Must Pass. I love the music so much, but I’ve been really connecting to his words and I’d just have to have that one with me.

With everything going on in the world it seems one thing we can always count on is music. That one song we always go to, that whole album that got us through a rough patch. Those certain lyrics cut deep, yet give us the comfort we need to get out of heavy gloom. Musicians like Will Levy are something to be appreciated. Not just for his contributions to the bands he’s in, but for his passion and drive to create music that never ceases to reach us in some type of crazy and relatable way. If you have never listened to Cold Moon or The Story So Far, I highly suggest you check both bands out. They will both become instant favorites and you’ll have a hard time not keeping them in your daily rotation. As always remember to give these bands and Will a follow, share their content, and be sure to check out the new album by Cold Moon, “What’s The Rush?”, that drops on May 7th.