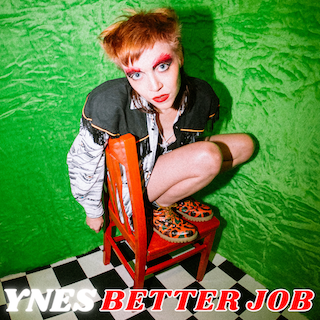 The punk genre originated in the mid 70’s with bands such as Sex Pistols and The Ramones paving
the way with new sounds, and an attitude that hadn’t been seen in the music industry before. The
punk movement was so popular because of its raw aggression and exciting visuals, the likes of which
many bands tried to replicate for years to come. Living now in 2021, punk has evolved and split itself
into hundreds of different styles and sub-genres, all of which use different aspects of the genre in
interesting and engaging ways. YNES’ attempt to recreate this style falls short of exciting to say the
least.

Instrumentally the track has some interesting features. The drums are well suited to the track, and
whether they are programmed electronically or performed live, the parts are well written and sit
well within the mix. The guitars are played with the messy feel you would expect within this genre
and show YNES’ skills as a singer/songwriter.

Thematically, the song itself comes across as very cheesy. Pitching itself as a protest to Rishi Sunak
telling musicians to ‘retrain’, the track has a lot of potential to spread a good message. However, a
lot of the words here are clumsily written and instead of displaying itself lyrically as a black and
white, straight to the point, punk style message, they end up coming across as corny and the
meaning can be lost in the slightly cringey writing. There are some interesting lines in amongst these
though, and this again demonstrates the artist’s potential to create something great.

Visually, YNES as an artist has a cool vibe. With her wide varying colour palette and bold makeup,
YNES shows individuality and a style reminiscent of the late David Bowie. Her voice shows elements
of Johnny Rotten style spoken vocals which almost works, and if it didn’t come across as cheesy as it
does, the track could be enjoyable.

With the many different path’s punk music evolved in, there are many different styles YNES could
have explored. Overall, if you wanted to listen to a punk band I would urge you to revisit the classics
rather than this slightly clumsy attempt to bring new life to the genre.