Kazoo-wielding pals Frank Turner and Jon Snodgrass have reunited after 10 years to create the feel-good sequel to the original cult-favourite ‘Buddies’, a light-hearted album borne from whisky and friendship that interestingly weaves their own amusing commentary throughout the tracks. Most importantly, it was all written and recorded in just one day. Buddies II follows the same formula; recorded in one day, it features the comical podcast slash music album but with two new additions: Todd Beene (Lucero, Chuck Ragan, Glossary) on pedal steel and Stephen Egerton (guitarist for Descendents/ALL) uncharacteristically on drums, of which an entire punk-inspired song ‘Stephen Plays The Drums’, is dedicated to acknowledging.

Turner is no stranger to controversy and facing mixed reception to past albums such as the notorious ‘No Man’s Land’, however ‘Buddies II’ seems tame and unproblematic in comparison. Despite the overall jovial vibe, toying with themes such as guessing the age of a dog, hugging your mates, and their travelling shenanigans in Santa Barbara, the pair do also touch on more poignant subjects. In the track ‘Bad Times, Good Times’, the pair grow more lyrically sombre as they describe the disappointing reality of the pandemic while still keeping instrumentally high-spirited and energetic. Comparing quarantine to the apocalypse, lyrics such as ‘losing track of time / seven weeks and change’ and ‘running out of recipes and TV boxsets/finished my to-do list, now I’m onto the don’t’s’ will feel only too familiar to the 2020 listener. Although, lockdown does not have appeared to affect their creativity, having recorded all of this via the help of Zoom and the internet. 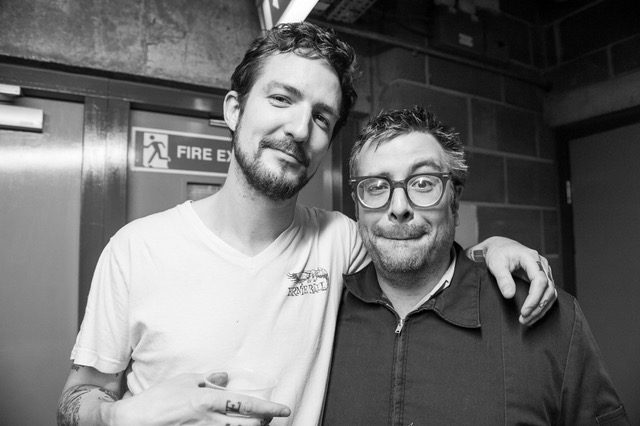 Why should you listen? If you’re looking for your spirits to be lifted, the hilarious silliness at the end of ‘The Fleas’ will cheer you up;  Jon spontaneously whips out a kazoo, and Frank very quotably jokes ‘the kazoo is a dangerous instrument, because in the wrong hands it can be used for great evil’. The entirety of the record is like listening to a radio show hosted by your best mates; comforting and funny. ‘Hold me homie’, rather than a love ballad from Marge to Homer Simpson, is a wholesome track about needing a proper hug on a rough day from your buddy. Relatable. The wah wah guitars alongside the acoustic strumming on ‘S-Bar’ will chill you right out within the first few seconds, as well as the light conversational element that runs throughout the track.

Genre-wise, each song changes at the will of the artists, though they are styles you’d expect from Snodgrass, being a highly respected figure in the US punk scene, and Turner, who consistently experiments with alternative rock genres. This makes for an interesting album, saving the listener from ever getting bored due to the sheer variety. If you’re a fan of punk, alternative rock, folk or even a slight element of country, you’ll enjoy this. Overall, it’s a bunch of musicians making music and having a laugh doing it; although not there, you’ll feel completely included in the experience. An excellent antidote to the gloom of lockdown.

Jon Snodgrass has a solo album out called ‘Tace’ released 9 October 2020 and Frank Turner has another joint album titled West Coast vs Wessex’, out since 31 July 2020.