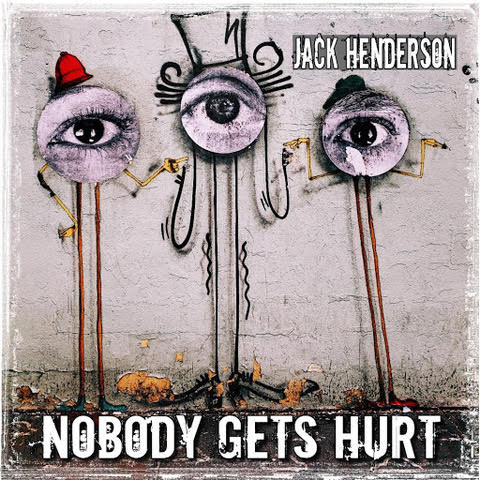 Glasgow’s own Jack Henderson brings us his latest single “Nobody Gets Hurt” from his upcoming album “Where’s The Revolution” which is due for release on 2nd October 2020.

“Nobody Gets Hurt” delivers a bundle of pain and disappointment written out and delivered with soul searing emotion and hurt. Jack’s voice is the perfect vessel for a song of this emotional temperament. It’s pure Tom; Waits or Petty, and every word feels like it’s been felt a thousand times over and tattooed on Jack’s soul.

The blend of synths and acoustics gives it a lift and brings something to the table that a straightforward acoustic number would lack. It’s enhancement of the texture really gives the lyrics something to cling on to and brings the song a greater sense of totality and richness.

Musically though it serves as a frame around the looking glass that are the lyrics and the vocals. This is the real core of Jack’s work. It’s a song about the end of things, about giving up on what you want and maybe consigning future dreams and ambitions to the gaping maw of the now.

“You can trust me every inch on this one Darling, you can have my word, just put the dream down darling, And nobody gets hurt”. The sense of the utter disillusionment of the world at large and the one specific to the narrator is clear in that line. Your dreams can’t fail if you don’t have any to begin with. It also assaults the notion that if we work hard enough then it’s going to happen. Sometimes all the work in the world can only get you to where you already are.

Jack describes the track as “Giving up on a dream often entails the painful acceptance of a perceived failure. Having set ourselves goals and applied ourselves to them we finally come to acknowledge there’s no cosmic certainty to how things work out merely because we dedicate our efforts to notions of being true to ourselves. What then remains for us is finding new meaning for our lives and reassessing what being true to ourselves might look like in light of a new reality.”

It’s absolutely a song for the frankly apocalyptic and endless disappointing 2020 and it’s well worth a listen. Yes it has bleak tones and yes they are delivered bleakly, but the authenticity, the imbued pain, and a voice that speaks to the depths of you, really should be experienced.

It’s 4 minutes and 28 seconds away from the reality of 2020 if nothing else so why not?