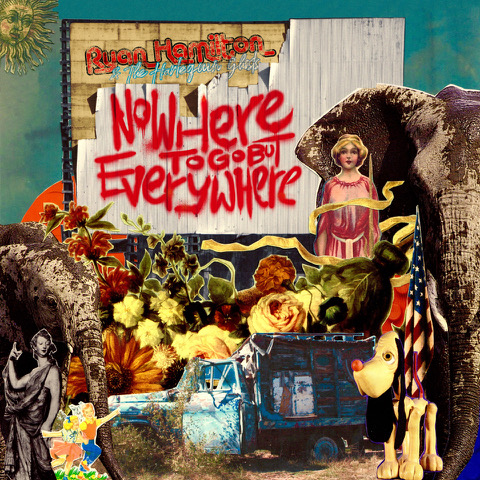 Ryan Hamilton and The Harlequin Ghosts have just released a single off their latest album, Nowhere To Go But Everywhere, which comes out September 18 through Wicked Label. The song is called, “Oh No,” and it features American singer/songwriter Kay Hanley, who gives the song a nice touch of “sing along” energy as she sings in the background. The song seems to be a cheery chant-like extension of Hamilton and the Ghosts’ song “Records and Needles,” which kind of lists a bunch of records that hold meaning for Hamilton. This newest single is a repetitive and simple chant that also utilizes clever word play- “my believin’ don’t stop,” “that funky music’s gettin’ played” – to list specific records and songs that one is likely to find at just about every record store because of their popularity and “classicness.” It’s a simple, but somewhat catchy little tune that is most appropriate for playing at…well, a record store!

Now let’s not forget the music video that accompanies the song. The video is a playful picture-by-picture dancing Hamilton that showcases the friendly and fun vibe that goes well with record searching and finding favorite gems. While the video was most likely prepared in Hamilton’s own home due to the pandemic and current travel restrictions, its simplicity and playfulness are perfect for this simple song that celebrates the unchanging and even revived tradition of record shopping amongst the giddy, hip youth.

It’s for sure nothing that tries hard to impress, but that doesn’t seem to be Hamilton’s style anyway as he sticks to what he knows: a classic, folky, rock formula with repeating verses well-suited for easy-listening. With the latest single being an extension of an older song, it’s fair to say we can expect the upcoming album to relish the same old sound that the band and their fans have embraced.