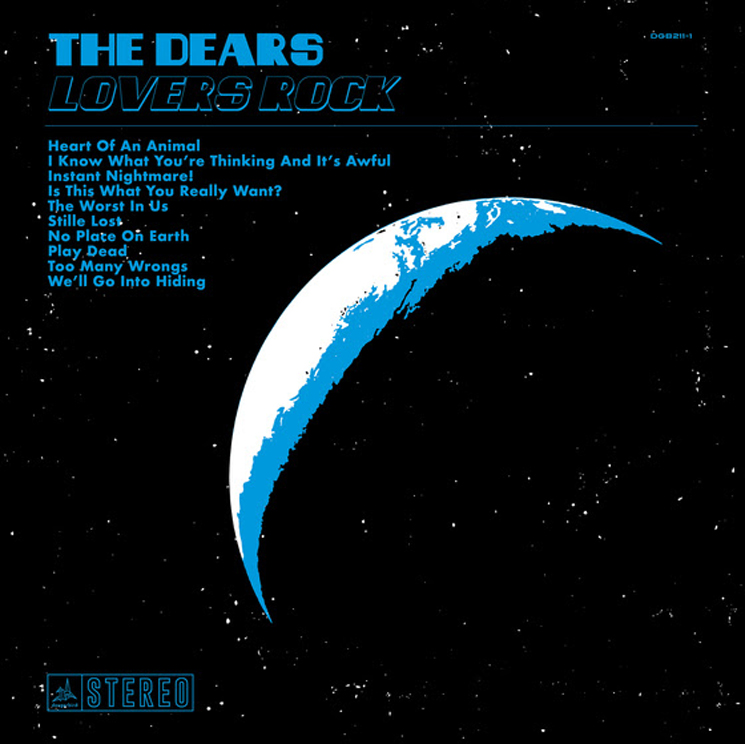 t’s been 3 years since the last offering from The Dears but they’re back with more of their signature indie-pop sound. Their breakthrough album No Cities Left was formed in the crucible of the post 9/11 world, and Lovers Rock emerges in a political and social landscape that is as turbulent, if not worse.

The core of the band Murray Lightburn (guitar and vocals) and Natalia Yanchak (keys and vocals) are married with children and so that brings a level of responsibility to the younger generation and a sense of needing to pass something on.

“There’s a direct line between the sort of doominess of No Cities Left and this album,” says Lightburn. “You could go straight from Lovers Rock to No Cities Left and it’s like they’re interlocked. But it’s a different kind of doom.  Around 2001, it felt like, ‘We have no control. We don’t know what’s going to happen next.’ Now it’s a doom that’s within our grasp. It’s in the air. It’s between us. But we do nothing about it.”

Very much of the mindset that music is something that connects, reassures and links people; the need for that kind of approach is prescient now more than ever.

The sound is poppy indie, of a Pulp / Doves kind of mould. It’s not an angry reaction to a broken world, but more of a soothing balm that can link the people that the world often alienates.

They are supposed to love songs after all not a call to war.

The first track Heart of an Animal sets the stall out. It has the floating chorus which brings back memories of late 90s indie and then has echoes of Bowie to round it out. Haunting vocals but not with the mission to make you sad. The stirring guitar brings it a sense of hope and potential joy, rather than doom and gloom.

I Know What You’re Thinking And It’s Awful slows it down a notch. Its paired back opening is just as bare-bones as it could be. The chorus is simplistic repetition that gives it a refrain of a trance track but with the soul of the guitar melody rather than says a banging bassline.

Instant Nightmare follows with something completely different. The discordant riff starts it off backed with what can only be described as an alien ray gun backing. It then intersperses guitar with more of the light vocals this time with a choral twist. It gives it a religious apocalyptic flair in the vocals, raised to something more positive when the guitars take back over. Almost a dialogue of the opposing parties.

Is This What You Really Want brings back more of the nostalgic sound with guitar as floaty as the vocal and it has the vibe of a dream sequence. There’s no dichotomy of sound this time, no argument, this is a song sung in one voice and has a calling to the simpler days with a paired back melody. There’s even room for a bit of back up saxophone. Nice.

The Worst In Us brings a more upbeat start again and shows that the roots of the band are firmly situated in the indie revival of the 90s. There are elements that you’ve heard this before but in a way that has more of the optimism of that decade. There’s none of the negativity or strident rage that so many responders to the current climate like to carry.

Even with the synthy bass-driven midsection that has a touch of Madness about it. If Suggs had a Moog that is.

Stille Lost has an eerie Doctor Who feels with a hint of a trippy circus theme. The vocal is played right down, almost sounding hungover or just woken up, slowly waking and climbing in pitch and volume as it carries on. A very simplistic drum beat and more of the organ work provides the melody. It’s one that slowly builds, slows and then rips into a dated sax solo. That’s not to say it’s bad. It absolutely fits and with the way the track progresses, you wouldn’t want anything else to crop up at that point. Somehow.

No Place On Earth starts like a chilled out Sunday morning, the ponderous drums setting the sedate pace. It adds intensity with a simply driven riff but not too much. It still feels like a Sunday when the guitars fade back out. Ashes to ashes and dust to dust bring out the religious imagery which is fitting (Sunday remember) and only the elements of the darkening guitar and jangling Discordia of the strings give you a hint it’s a part of the album concerning the negativity and broken downtimes.

Play Dead gives us more of the organ but it’s less Whiter Shade of Pale and more Lighthouse Family. It’s got a very low key vocal and an almost staid pace. There is a lift when Lightburn puts the power in but other than that it’s a chilled out low key number.

Too Many Wrongs starts at a similar pace with a return to the floatier vocal and again a simple melody. This one channels the much older school 70s crooners which isn’t a favourite by any means but fits the overall styling of the album.

We’ll Go Into Hiding follows a similar vibe but with a more stark guitar sound and with the drums builds into the floating vocal and it feels a lot less whiny crooner than Too Many Wrongs.

The album as a whole sounds very much dated. It’s as if nothing musically has happened in the span of the last 20 years and in terms of some of the changes in style and taste maybe that’s a good thing. This comes from the era when Indie music actually made the charts and was more likely to be heard in general than in niche. It, therefore, feels like it’s calling back to a better time, to a simpler time, and ironically a time when there less of a homogenous nature to things, considering it apes the music of another era so well.

This is perhaps not a blend of the best of the best of that era and maybe doesn’t always cherry-pick the right parts. The vocals are great and carry a real soul and feel. It unites the album and with one’s eyes closed, you could imagine Bowie singing.

However there’s no real stand out track on the album, there’s nothing that grabs the attention. The music itself is very paired back and simplified and so, perhaps it’s intent, serves as nothing more than a faded backdrop to the soliloquy of the lead actor. It’s not to say the musicianship isn’t there, what’s there is good, but it takes hiding its light under a bushel to the extreme and it leaves the album a little flat.

Overall this doesn’t scream the origins of the band and the time of their musical formations but carries itself like a slightly faded memory. You can tell where it has come from but the colour and the zest have faded.

Every track follows the same sort of pattern and aside from an occasional sax solo or nifty quirk in backing sound, there is very little to separate them. It sounds like 10 variations of one song as opposed to an album. Like a REM album without the singles.